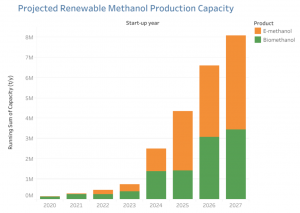 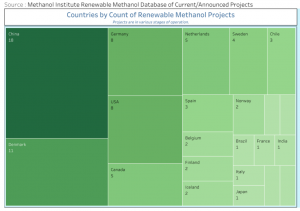 With 80 renewable methanol projects already announced, we are seeing clear signs of an incoming wave of bio-methanol and e-methanol production”

WASHINGTON, DC, USA, October 5, 2022 /EINPresswire.com/ — The Methanol Institute (MI) has released an interactive map on its website (www.methanol.org/renewable/) tracking more than 80 renewable methanol projects around the globe that are projected to produce more than eight million metric tons (2.7 billion gallons or 10 billion liters) per year of e-methanol and bio-methanol by 2027. Curated by the MI team based on publicly announced projects, the database provides a novel look at the anticipated growth of renewable methanol production.

Infographics, using the collected data, have helped to contextualize the global distribution of renewable methanol projects, and projected production capacity expansion over the coming years. The interactive map provides data for each announced project including company name, location, planned production capacity, and anticipated year for the start of production.

Methanol is an essential chemical building block and emerging energy resource. Methanol is synthesized using a mixture of hydrogen, carbon dioxide, and carbon monoxide. These elements can be derived from a variety of feedstocks and processes, with conventional methanol produced from natural gas or coal. Renewable methanol is a low carbon and net carbon neutral liquid chemical and fuel produced from sustainable biomass, often called bio-methanol, or from captured carbon dioxide and hydrogen produced from renewable electricity, referred to as e-methanol.

Renewable methanol significantly reduces greenhouse gas intensity and contributes to the energy transition in end-user markets particularly in hard-to-abate sectors. As a building block for many downstream chemicals, low-carbon methanol facilitates the production of green chemicals. Sustainably produced methanol is also being utilized as an alternative drop-in fuel in shipping, road transport, and power generation to lower overall emissions and impact on the environment.

In addition to the growing number of renewable methanol projects, there is clear evidence that the scale of production for bio-methanol and e-methanol facilities is ramping up. With ongoing advancements in technology and increased government support, the capacity of individual renewable plants is expected to rise from 5,000-10,000 metric tons of methanol per year to 50,000-250,000 metric tons per year or more over the next five years.

Users can now see the infographics on MI’S website: HERE