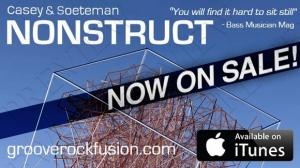 The most anticipated instrumental rock record in the world.

RALEIGH, NC, USA, October 31, 2022 /EINPresswire.com/ — Nonstruct
A Transatlantic Collaboration Between
America and The Netherlands
will be released November 1st
It is available on iTunes 11/1

Bass Musician Magazine, one of the strongest advocates for instrumental rock music in the world, said “This album is a high-energy display of Groove Rock Fusion at its finest; think Funk meets Progressive Rock. There are giant-sized helpings of lip-curling bass groove and astronomic guitar shredding in eight original tracks…Very Tasty, Particularly Dazzling…” – Raul Amador, Editor

NFL great Bernie Kosar ran into samples of Casey & Soeteman’s music on Twitter. He says “The music is great. I can’t stop listening to it. I’m happy to announce the release of their record to the world. Here it comes! My favorite track is called Mess. The world is going to hear this music.”

The Story of Nonstruct (click here for bios)
One day Casey was listening to music on the internet and he heard an amazing piece of music. He immediately sought the artist out to ask him if he could play on his next track. About a month later Soeteman sent Casey an unfiished track called SWAMP with a big space in the middle. Casey placed a bass track there which has been called “very tasty” and “impressively dazzling” by Bass Musician Magazine and it’s on the new Casey & Soeteman collaboration Nonstruct. The two have never spoken, never Zoomed or used Skype; only emails and music parts copied into their shared Dropbox. In the bass, guitar, and instrumental rock communities Nonstruct is now one of the most anticipated album releases this year.

The post MEDIA ONLY LISTENING PARTY DOWNLOAD 10/31 and 11/1 for the debut of Casey and Soeteman’s release: Nonstruct first appeared on Amsterdam Aesthetics.