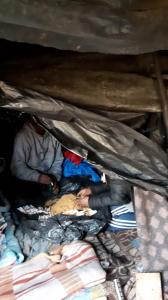 At Europe’s borders, free movement does not exist for people, but it does for commodities, even if they are illegal, such as cigarettes created by migrants in the woods near the border. 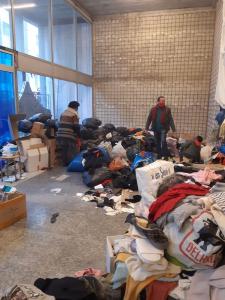 There was a large mobilisation of support comprising citizens’ groups, businesses, and individuals citizens living in Brussels: residents, expatriates, and undocumented people. 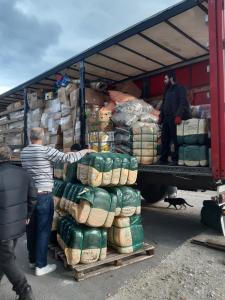 After enduring a tremendous tribulation during a very restricted Covid-19 era, the items were delivered to its final destination.

The refugees emerged from the woods in order to go to the shed where the materials had been stashed for them. 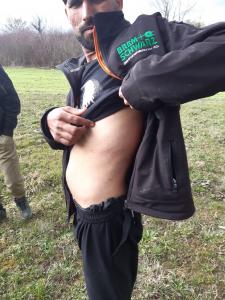 If you’ve never been there, you can’t really understand the problem of refugees there. Then you see how hard everything is.

The European Community House (MPVEH) visited the Croatian-Bosnian border to see the impact of the European migration policy.

A battle between the destitute is building at Europe’s borders, where refugees are turned away by European migration rules.”

BIHAć, UNA-SANA CANTON , BOSNIA AND HERZEGOVINA, November 2, 2022 /EINPresswire.com/ — The European Community House (MPVEH) visited the Croatian-Bosnian border to see the impact of European migration policy. It began with a word, a speech in the European Community House (MVPEH), and culminated in a massive action. Various groups and individuals in Brussels gathered clothing to assist those in need, resulting in an excess of stock in their Brussels depots. There were people in desperate need who were stranded at a European border in perilous situations. The notion then evolved to convey this excess to areas where there were unmet requirements, namely Bosnia and Herzegovina on the Croatian border. The European Community House (MPEVH) hired a humanitarian truck that delivered 48 m3 of warm clothes, shoes, blankets, and non-perishable food to women, men, and children, some of whom were disabled or needed medical help.

There was a large mobilisation of solidarity in the Brussels-Capital Region, comprising citizens’ organisations, shops, and individuals from the European Community House (MPEVH), namely Brussels residents, expatriates, and undocumented migrants. They all came to help out on a volunteer basis. This is how we were able to load this vehicle before the end of winter, despite the extreme weather in Bosnia, which was creating hypothermia issues. The European Community House’s (MPVEH’s) solidarity initiative demonstrated that undocumented migrants from Brussels also assisted in the gathering and painstaking sorting of the garments, which were then properly packaged. The European Community House (MPVEH) organising team then drove all the way to the humanitarian truck in the midst of the COVID-19 period, which was rather straightforward in the European Union zone with considerable freedom of movement despite the health crisis. Outside of the European Union, especially between Croatia and Bosnia and Herzegovina, it was a lot harder.

Halted at the border
Finally, arriving at the ultimate location with the material and being able to distribute the relief products during the severely restricted COVID-19 time was a true struggle. The organisational team came one day later than the validity of our COVID test and was forced to return to Croatia by Bosnia. The vehicle was positioned in a free zone under customs supervision to protect the commodities carried from the high danger of premature disappearance. Despite this security measure, bribes were exchanged for customs officers to expedite the proceedings. The quick COVID test was performed at a Croatian hospital 100 kilometres from the border; Bosnian law allowing speedy testing had been altered the day before, and another bribe paid to the same customs officer aided us in eventually crossing the Croat-Bosnian border. The European Community House (MPVEH) observed a hilly terrain inhabited by vulnerable people, as well as an incredibly complicated situation caused by migrant flows halted at the Croatian border owing to European migration policy. The European Community House (MPVEH) supplied food and clothing to migrants living in the forest and in squatted homes, as well as to local communities living in extreme poverty. The European Community House (MPVEH) also talked to field associations, migrants, and local officials, with whom we planned a trilingual (French, Bosnian, and English) conference using the citizen intelligence technique.

Conflict between the poor
One thing is certain: the European Community House (MPVEH) has achieved a fantastic initiative, and the organisers saw firsthand, on the ground, at the border between Bosnia and Herzegovina and Croatia, what European policy on Europe’s borders meant in terms of migration. They observed that products and commodities are free to migrate, but people are not. They saw refugees stuck in the jungle who made cigarettes in Bosnia to make money so they could cross the border into Croatia and sell them in Europe. This demonstrated the consequences of European migration policy: by barring people at a border due to a migration policy decided in Brussels, you create a slew of additional issues, not only for the people who are barred at the border but also for the people who live there and do not want thousands of people walking through their garden. It has also been noted that entrusting foreign groups with handling the humanitarian effects of this migrant strategy complicates local democracy. In fact, international groups like the Red Cross and Caritas think they have the power to make decisions without talking to the towns or people who live in the borderlands where the migrants are stuck. This unhappiness motivates everyone there, even those who may support migrants locally, to take a position against them. Every Tuesday, there was a protest against immigration, in which anti-poverty organisations also took part. A conflict between the poor is brewing at Europe’s borders in nations outside the European Union, where migrants are being turned away by European migration policies. The situation at these borders is volatile, yet the European nations are more peaceful. Worse, the European Community House (MPVEH) has heard that when migrants make it across the border, Croatian police beat them, strip them, break their cell phones, take their money, and throw them back into Bosnia. However, some of these migrants have arrived straight from combat zones. They are entitled to enter Europe as refugees. They escape via Greece, Macedonia, and Bosnia on the Balkan Road.

Blackmail people
Refugees of Muslim ancestry chose this path because they believe they will be better supported by Bosnian Muslims. This is not true. At best, anti-poverty groups help them in secret, because they know that if the authorities find them, their government aid would stop. The European Community House (MPVEH) first met migrants living in the woods or squatting in abandoned buildings via one of these organizations. The migrants they encountered were kind and excited to meet us in the jungle, where they were living in awful circumstances. These migrant workers are always afraid. They are always looking around since they are regarded as criminals, and even the few locals who assist them are terrified. They, too, are considered criminals and are sometimes imprisoned. The Bosnian police seem to be more reasonable than the Croatian police, although they are also overburdened. However, we have not heard any reports of migrants being mistreated. However, Europeans who are not affiliated with international NGOs delivering humanitarian relief are not well-regarded by Bosnian police. The police conduct frequent searches and seize their paperwork. Once the documents have been requisitioned, they can’t be moved and can be used to blackmail people in different ways. The very destitute populace is in direct opposition to the humanitarian help delivered by Europeans on the ground, who are likewise in need. The local community notices that all of the help is going to migrants and that little is left for them.

To produce an exhibition, the European Community House (MPEVH) is still seeking assistance and/or funding. In addition, they want to implement a follow-up initiative in Bosnia and Herzegovina in conjunction with local organisations and citizens. You may send funds to IBAN: BE14 1030 2962 5383, SWIFT Code: NICABEBB. Maison du Peuple d’Europe, Rue de l’Allée verte 72, B-1082 Bruxelles, Belgium For more information, visit https://mpevh.be/ or mail to [email protected] or call +32 485 92 56 81

Andy Vermaut is the author of the text.
{PostVersa}
+32 499 35 74 95
[email protected]
Visit us on social media:
Facebook
Twitter
LinkedIn
Other

The post The EU’s migration strategy pushes the underprivileged to fight at Europe’s borders first appeared on Amsterdam Aesthetics.