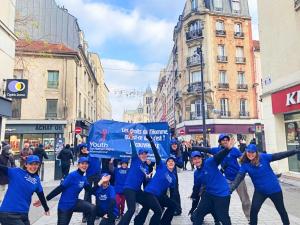 Scientology Volunteers in Paris raise awareness of the Universal Declaration of Human Rights with a flash mob in Saint-Denis calling on the 30 rights.

it is now more clear than ever that the UN UDHR must be taught in schools, clubs, media and everywhere if we want to end wars once and for all”

PARIS, FRANCE, January 19, 2023 /EINPresswire.com/ — Church of Scientology has launched a challenge to all members and friends to celebrate all year long, the 75th Anniversary of the Universal Declaration on Human Rights (UN UDHR), that will culminate in a big event on December 2023 at the United Nations Geneva. The event will be organized by two entities have gained UN recognition for their work and granted Special Consultative Status to the Economic and Social Council and these are the italian Associazione per i Diritti Umani e la Tolleranza (Association for Human Rights and Tolerance), and Fundación para la Mejora de la Vida, la Cultura y la Sociedad (Foundation for the Improvement of Life, Culture and Society.

“In a world where people are barraged constantly by troubling media reports of human rights violations—ranging from deadly poison gas attacks to human trafficking, poverty and man-made famine—few understand their rights and even fewer know how to exercise them.” says the official international website of the Church of Scientology.

In its longstanding tradition of championing the cause of freedom for all, the Church of Scientology and its members seek remedies through sponsorship of one of the world’s broadest human rights education and public information initiatives, United for Human Rights, and its program for young people, Youth for Human Rights.

The aims of these nonprofit, nonreligious organizations are twofold: Teach young people their inalienable rights, thus significantly increasing awareness in a single generation; and petition governments to implement and enforce the provisions of the 1948 United Nations Universal Declaration of Human Rights, the world’s preeminent human rights document, and mandate human rights education in schools.

United for Human Rights (UHR) and Youth for Human Rights (YHRI) support myriad activities and provide educational resources in 17 languages that advance this initiative at all levels of society. These programs are widely embraced and used by schools and churches, civic and community groups, human rights organizations, police forces, armed forces, and governmental organizations worldwide.

In this line, volunteers from the Church of Scientology of Paris launched their year-long celebration of the 75th anniversary of the Universal Declaration of Human Rights with a flash mob. Their intention: To raise awareness of the 30 articles of the Universal Declaration of Human Rights. These energetic young dancers carried a banner saying “Human Rights—What Are They?” And they encouraged people to discover the 30 rights everyone has simply by being human.

“Paris has a very special place in human rights history. It was here that the Universal Declaration of Human Rights was adopted in 1948—a mere three years after the end of World War II, a conflict that plumbed the depths of Human Beings’ inhumanity to every person,” said Ivan Arjona, the representative for Scientology to the European Institutions and the United Nations.

As to the Declaration, the fledgling United Nations, comprising 48 Member States at the time, met at the Palais de Chaillot, across from the Eiffel Tower. For the first time in history, an international body representing the nations of Earth agreed on the rights inherent in every member of the human family: the 30 articles of the Universal Declaration of Human Rights.

While Eleanor Roosevelt, an American, was the first person to chair the UN Commission on Human Rights and she oversaw the drafting of the Universal Declaration of Human Rights, her vice-chairman, French law professor and judge René Cassin, is credited with being the one most responsible for drafting the document, for which he received the Nobel Peace Prize in 1968.

“Needless to say, society can not afford to let that ‘sleeping dogs’ or ‘awakening dogs’ make anyone in the 21st Century revive the sufferings of war, it is now more clear than ever that the UN UDHR must be taught in schools, clubs, media and everywhere if we want to end wars once and for all. This is the tool we have, but we must all use it”, said Ivan Arjona, President of the European Office of the Church of Scientology for Public Affairs and Human Rights, operating from Brussels, near the European Institutions.

The post Scientology celebrates start of 75th anniversary of human rights in 2023 with flash mob at Saint Denis in Paris first appeared on Amsterdam Aesthetics.