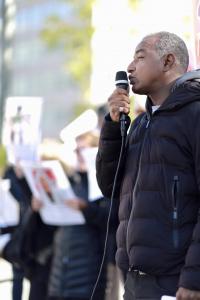 A little over two weeks ago, the United Nations General Assembly had a stage for Abdel Fattah al-Burhan. Why did they do this? (Photo Igor Pliner) 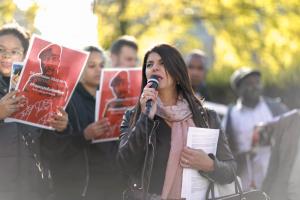 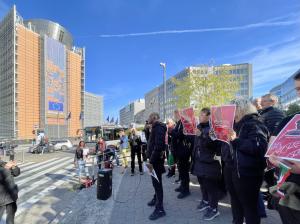 The Sudanese people realise something must change! They need a reconciliation figure to reclaim peace, unity, and power in Sudan. (Photo Igor Pliner) 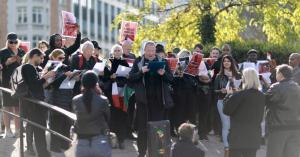 Andy Vermaut:”Sudan’s Al Burhan government has violated human rights and assaulted protesters. Together, we seek to convince the Sudanese to have free and fair elections to build a representative administration.” (Photo Igor Pliner) 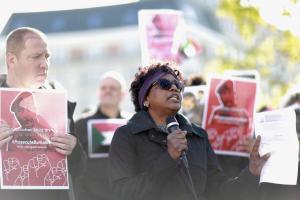 Children protesting in Sudan have been abused and unfairly detained. The authorities have blocked access to the internet and are endangering women’s rights. (Photo Igor Pliner)

We have gathered to raise the continued human rights abuses, brutality against women, political dissidents and anybody else who dares to speak out in Sudan to the attention of the world community.”

BRUSSELS, BELGIUM, October 6, 2022 /EINPresswire.com/ — On October 4 2022, a big rally was organized in Brussels against the atrocities committed by general Abdel Fattah Al Burhan in front of the European Commission. One of the messages of the demonstrators was clear: all the crimes committed against the civilian population by Al Burhan are also difficult for Europeans to digest. In addition, the Sudanese people were really pleased with the wonderful demonstrations of solidarity that were shown in the European capital.”It is so nice to see and it breaks our hearts that people in the European capital of Brussels are aware of the problems of our people and the injustice that has been done to the Sudanese people. This recognition from Belgian and European people who came here in solidarity with our people. I really didn’t expect that so much people would come. It’s encouraging to see such a vast number of individuals expressing their support for the people of Sudan,” stated Yahia Omran.

Andy Vermaut, the president of the World Council for Public Diplomacy and Community Dialogue was the first to give a small introduction there, emphasizing the importance of the venue and also the fantastic right we have in the European capital to be able and allowed to protest. All this is in stark contrast to the situation in Sudan where Al Burhan does not tolerate any protests and bloodily beats them down. Burhan’s grip extends all the way to our European Capital in Brussels, where Sudanese people were threatened by members by the regime not to come to the rally in Schuman Square if they wanted nothing to happen to their families in Sudan. Thus, the Sudanese diaspora are even suppressed by the regime in Belgium. Andy Vermaut explains:”Please. The Sudanese must be brave.

In the future, they should kindly provide everyone who is Sudanese and lives here in the diaspora the opportunity to choose for themselves whether or not they want to attend a rally in Europe? Belgium is not Sudan. People of Sudan united in hope for a better future, please do not give in to their attempts to further scare you. Nonetheless, I am glad that some Sudanese did not succumb to intimidation. Then I think first of all of the prominent members of the Sudanese community in Belgium namely Yahia Omran, Afaf Hassan, Bushra Alkabour, Abdul Azim Tabag, Othman Ahmed and Mohamed Hirika. Yes, they and we have gathered here for a crucial meeting in the heart of Europe’s capital, in full view of the European Commission and the European Ministry of Foreign Affairs. Yes, we were all there as guardians of human rights, citizens of the globe, individuals from many continents, and everyone of us has some personal responsibility for this. Humans have a tendency to get kindly self-satisfied and we forget often that fighting injustice is everyone’s shared duty, even if we all struggle in the battle for survival. We were all here together, and we will all make this earth a more lovely place to live. So we have gathered at the heart of Europe’s political and economic life, where responsible people may be slightly more responsible in their handling of the worlds most pressing and most important questions.”

Attention to the international community
Afterwards, the crowd that had arrived in Brussels Schuman Square shouted loudly along.“With Abdel Fattah al-Burhan too much people die in Sudan. #StopAlBurhanInSudan and #FreeSudan”. This could be heard as far away as the offices of the European Commission and the External Action Service in Brussels. The audience’s excitement stimulated his own zeal. Ultimately, it’s always great to have individuals supporting the Sudanese human rights fight. This consistently makes him feel wonderful and more eager. After the initial slogans and warm-up, Andy Vermaut continued his speech with enthusiasm.”To end the ongoing violations of human rights, violence against women, political dissidents, activists for human rights and political affairs, and anyone else who dares to speak out in Sudan, we have come together here peacefully today to bring this to the attention of the international community, not only the United Nations Human Rights Council, but here the European Commission, that we can see in front of us. We, the residents of this continent, respectfully request that those who control Europe’s political control stick do all in their power to remove Abdel Fattah al-Burhan from his political perch.Why? Because… Any and all freedoms and rights guaranteed by the United Nations Charter are threatened by this individual. So why did no one in Europe raise a fuss? Why was it that Abdel Fattah al-Burhan was given a stage by the United Nations General Assembly less than two weeks ago? What happened to European Union protests? Where was the criticism from Joseph Borell and the External Action Service?”

The pursuit of Justice?
Andy Vermaut continues: “We’re asking the EU today where the justice is for the Sudanese. Why hasn’t the Sudanese government punished those who killed innocent protesters? Justice has been abandoned. When will Europe take responsibility? If Europeans don’t speak out against this tremendous injustice, we’re no better than the murderous government. We were before the EU because of this. Since this coup leader is a criminal, I encourage the European authorities and everyone to restrict al Burhan’s freedom of movement. More Europeans are waking up to last year’s lying, manipulation, and abuse of the Sudanese. Because of our interdependence, I feel the injustice done to the Sudanese is also done to us. We’re here because we want to halt the Sudanese people’s suffering and help them right their wrongs. We were all there for this reason.”

Interconnected nature of humanity
Andy Vermaut: “Because of this struggle, the Sudanese people’s ideals have been flagrantly violated. Yes, the Sudanese deserve better. The Sudanese people are beginning to realise that something must change and that they will need a reconciliation figure to assist them to regain peace, unity, and power. As a global citizen, I regard the suffering of the Sudanese as an assault on my universal rights of we the people. A modern European president or government leader would never open fire on dissidents. Europeans think differently. Sudan’s Al Burhan dictatorship has violated human rights and abused protestors; this must be exposed. Together, we want to persuade the Sudanese to have free and fair elections to form a government that represents their interests. Europe really needs to put more pressure for this and Europe’s voice should not be ignored in this. The Sudanese people are more aware than ever of the need for a new path, a reconciliation figure to bring peace, unity, and power to the nation, and for their demands to be heeded. The raw Sudanese reality is a disaster. Europe may lead the world in this regard. Until recently, it seemed unthinkable that a European president or government leader would open fire on dissidents. No clue. I’m with the Sudanese, where this is still true. Sudanese demand restitution for Abdel Fattah al-mistreatment Burhan’s during the last year. Europe must act to support the Sudanese people.”

Crackdown and violence on women
Manel Msalmi, president of the European Association for the Defense of Rights and Freedoms then took the floor:”Three Central Reserve Forces personnel raped an 18-year-old protester on March 14, 2022, according to the survivor and witnesses. Following the crackdown on protestors in Khartoum near the Masalamya bridge, Sudanese riot police dragged a South Sudanese lady and two other females off of public conveyance. The troops followed the girls and raped the survivors at the bridge. Locals and tourists heard her cries. Three cops battered and gang raped the victim. She was discovered by locals, who rushed her to the hospital. On December 19, 2021, 13 women were gang-raped and sexually assaulted. Sudanese military and coup leaders use sexual abuse to repress women demonstrators. In the prior situation, no inquiry or accountability steps were conducted. Two more women alleged sex assault by security officers in January 2022. Lieutenant General Al-Burhan issued emergency order No. 24 on December 24.3/2021, which gave regular security forces, including the police, the Sudanese Armed Forces, the Rapid Support Forces, and the General Intelligence Service, new broad powers to arrest and search people and buildings, control people’s movements, and take goods and property.The emergency order also immunised regular soldiers. This new emergency decree ended responsibility and punishment for security force offences on October 25, 2021. On March 3, 2022, the June 3 Massacre inquiry committee ceased activities. “Security personnel evacuated premises inhabited by the committee’s guards and turned them over to authorities,” the committee’s leader stated. They stopped committee personnel from taking equipment. Emergency legislation and prohibiting investigations into crimes against demonstrators must cease. Sudan must punish sexual and gender-based abuse against women. Sudan stoned a 20-year-old woman for adultery. It’s the first instance in a decade. Maryam Alsyed Tiyrab was condemned to death by stoning for adultery on June 26 2022. She alleges she was refused a counsel and the court didn’t have a police complaint before her trial. Tiyrab appeals to Sudan’s High Court.”

Minority rights
Manel Msalmi, the very passionate president of the European Association for the Defense of Rights and Freedoms continued by listing the many human rights violations in Sudan:”On June 24 2022, Muslims-turned-Christians were arrested. Christian Solidarity Worldwide (CSW) alleges they were mistreated in detention. The four were freed on the same day but re-arrested on June 28. According to Christian Solidarity Worldwide, “the men faced the death sentence on July 3 if they would not abandon their Christian beliefs and agree not to pray, communicate their faith, or engage in any activity that might identify them as Christians.” The guys refused and were tried for apostasy. Christian Solidarity Worldwide claims that Sudan’s Ministry of Guidance and Religious Endowments sanctioned the four Christians’ church during the transition phase. The church shuttered after threats and violence from Muslim fanatics. Three more churches in Zalingei have closed this year due to threats and violence, according to the organisation. Following Omar al-collapse Bashir’s in 2019, CBN News reported only a short time of freedom. Burhan’s military takeover brought state-sponsored persecution back to Sudan. Morning Star reports that Christians in Sudan fear the military takeover would revive the most restrictive features of Islamic law. Sudan ranks 13th on Open Doors’ 2022 World Watch List of persecuted Christian countries. According to the U.S. State Department’s International Religious Freedom Report, conservative Islam still rules Sudanese society, despite decriminalising apostasy and halting church demolitions. Christians face prejudice and difficulty acquiring church construction permits. Burhan’s administration must answer for atrocities against women, civilians, and demonstrators.”

The post At Brussels Schuman the crowd shouted:”With Abdel Fattah al-Burhan too much people die in Sudan” first appeared on Amsterdam Aesthetics.