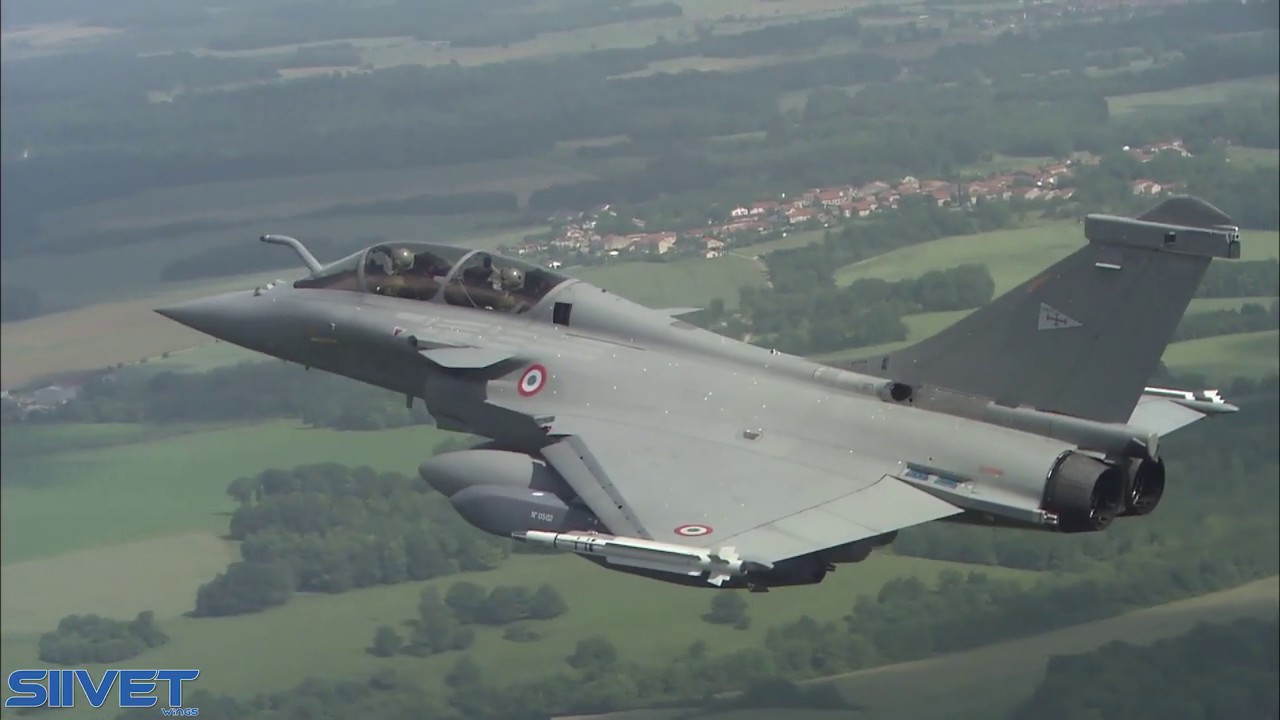 Dassault’s Rafale multirole jets doing what jets like to do most: flying.

The Rafale, a fully “Omnirole” fighter, is available in three variants:

The Rafale, with its “Omnirole” capabilities, is the right answer to the capability approach selected an increasing number of governments.
It fully complies with the requirement to carry out the widest range of roles with the smallest number of aircraft.
The Rafale participates in permanent “Quick Reaction Alert” (QRA) / air-defense / air sovereignty missions, power projection and deployments for external missions, deep strike missions, air support for ground forces, reconnaissance missions, pilot training sorties and nuclear deterrence duties.
The Air Force single-seat Rafale C, the Air Force two-seat Rafale B, and the Navy single-seat Rafale M feature maximum airframe and equipment commonality, and very similar mission capabilities.

Lessons learned from the latest conflicts where air power was used, can be summarized into four overarching expectations about weapon systems political decision makers:
Versatility, that is the capability, with the same system, to perform different missions,
Interoperability, or the ability to fight in coalition with the allies, using common procedures and standards agreements, and collaborating and communicating in real-time with other systems,
Flexibility, which can be illustrated the ability to conduct several different missions in the course of the same sortie (“Omnirole“ capability). With this capability, it is possible to switch instantly on the demand of a political decision maker, from a coercion mission (“strike force”) to a preventive mission (a dissuasive low-altitude, high-speed “show of force”), or even to cancel a mission until the last second (reversibility),
Survivability, that is the capability to survive in a dense threat environment thanks to stealthiness and / or to advanced electronic warfare systems.

The “Omnirole” Rafale combines all these advantages: it is relevant against both traditional and asymmetrical threats, it addresses the emerging needs of the armed forces in a changing geopolitical context, and it remains at the forefront of technical innovation.
Thanks to its versatility, its adaptability and its ability to meet all air mission requirements, the Rafale is the “poster child” transformational fighter which provides a way forward to air forces confronted to the requirement of doing “more” with “less”, in an ever-changing strategic and economic environment.
Of a moderate size, yet extremely powerful, superbly agile and very discrete, the latest type of combat aircraft from Dassault Aviation does not only integrate the largest and most modern range of sensors, it also multiplies their efficiency with a technological breakthrough, the “multi-sensor data fusion”.
The Rafale features a delta wing with close-coupled canards. In-house research in computational fluid dynamics has shown the specific benefits of close coupling between the wings and the canards: it ensures a wide range of centre of gravity positions for all flight conditions, as well as excellent handling throughout the whole flight envelope.
The close-coupled canards / delta wing configuration is key to the combat performance of the Rafale: even at high angle-of-attack, it remains fully agile, and its range performance in strike missions with heavy weapon loads is unmatched for such a compact design.
An advanced digital “Fly--Wire” (FBW) Flight Control System (FCS) provides for longitudinal stability and superior handling performance. The FCS is quadruple redundant with three digital channels and one separately designed analogue channel, with no mechanical back-up: design independence between channels is key to avoiding simultaneous anomalies on all channels.

The Rafale is safe and easy to fly in all flight regimes, featuring the same precise, yet benign handling performance in all load-out configurations throughout the flight envelope.