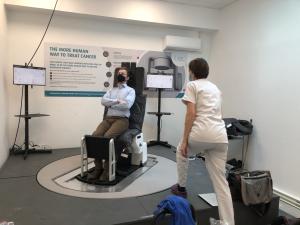 We seem to have an intra-fraction accuracy that is better than in supine, and the patient is also more comfortable.”

The first study on pelvic cancer patients positioned in an upright position has been conducted at the Centre Léon Bérard in Lyon, France – a comprehensive cancer centre that is dedicated solely to cancer care, research and education.

Leo Cancer Care’s upright patient positioning system was installed at Centre Léon Bérard for a series of patient trials to determine how delivery of vital cancer treatment in the upright position, as opposed to the traditional method of laying supine (flat/horizontal on a bench), might improve patient experience, clinical effectiveness, and access to radiotherapy.

This groundbreaking new technology forms part of Leo Cancer Care’s mission is to make the delivery of Radiation Therapy ‘more human’ and according to patients who took part in the study, is a significant improvement on the traditional supine approach.

THE KEY FINDINGS HIGHLIGHTED IN THE REPORT ARE:

2. The intra-fraction motion was within three millimetres for more than 90 percent of patients in a 20-minute time frame in the upright position for the pelvic tumor site. This was evaluated as acceptable and, in some cases, better than supine. (Intra-fraction motion is the variability seen in multiple images acquired during the treatment fraction/session ).

The patient’s subjective assessment of the upright positioning was at least as good and for some items even better than in the supine position.

Niek Schreuder, Chief Scientific Officer at Leo Cancer Care, said: “The findings reported here are complementary to the results from a recent study comparing male pelvic organ shapes and positions between the supine and upright positions.  Considering these early promising factors, treating pelvic targets (male and female cancers) in the upright orientation might become the preferred method in the very near future.”

A total of 16 patients (eight men/eight women) with prostate, bladder, rectal, endometrial, or cervix/uterine corpus tumors were included in this study which took place between October 2021 and June 2022. Their ages ranged between 35 and 81 years; heights ranging between 152 to 182 cm and patient weights were between 41 and 107 kg. The patients were all at various stages of their treatments including chemotherapy and radiotherapy.

Using the upright solution during these studies also required no use of skin marks (small tattoo dots used to align patients with the lasers during each session of treatment). The repeat setups were performed only using the immobilization devices and the upright positioner, including the coordinates of different parts of the positioning system.

Regarding the study findings and the future of how radiation therapy delivery might change Sophie Boisbouvier said: “I think the study has shown that we can treat the patients with pelvic cancers in an upright position.

“We do not need more time to do this than when the patient is in the lying (supine) position and we seem to have an intra-fraction accuracy that is better than in supine, and the patient is also more comfortable.

“I think we can hypothesize to improve the patient’s experience of their treatment, but we can also imagine decreasing the side effects of radiation therapy with better repositioning and immobilization of the patient.”

Stephen Towe, CEO of Leo Cancer Care, concluded: “This is a hugely important study for Leo Cancer Care but also for the field of Radiation Oncology. Up until this point, there have been a number of papers published on the potential clinical benefits of upright patient positioning. This is the first paper specifically discussing the benefits of the Leo technology so it is a powerful indication of our ability to live up to the hype.”

The Leo Cancer Care technology is not yet commercially available and will not treat patients until 510k or a CE mark has been achieved.