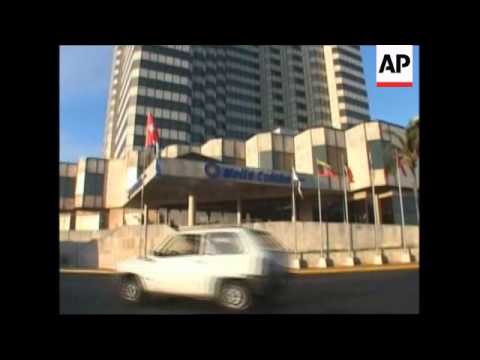 1. Pull out from Hotel Nacional
2. Wide of Riviera Hotel
3. Pull out from entrance of Riviera Hotel
4. SOUNDBITE: (Spanish) Francisco Munoz, Havana resident:
“They are new measures, new measures that are good. It means we are prospering and moving ahead. We’re overcoming the ‘special period’ that hit us so hard for 20, for 50, years. We hope that we Cubans also have gained the rights with our own efforts within our revolution.”
5. Tilt down of Melia Cohiba Hotel
6. Close of Cuban flag
7. Tilt down of Habana Libre Hotel (formerly Havana Hilton)
8. Wide of Habana Libre entrance
9. Various of car rental office
10. Mid of front desk at Hostal Sevilla
11. SOUNDBITE: (Spanish) Elizabeth Quintana, Havana resident:
“I think it’s a very good thing because I was born here and live here. I believe, as a Cuban, I have the right to it all. It’s good. Really good.”
12. Pan right from Cohiba Hotel to Riviera Hotel

New President Raul Castro’s government has lifted a ban on Cubans staying at hotels previously reserved for foreigners as of midnight on Monday, ending another restriction that had been irksome to ordinary citizens.

Front desk workers and managers at the Nacional, Valencia and Santa Isabel hotels in Havana said Ministry of Tourism officials told them Cubans were allowed to stay in hotels across the island.

“I think it’s a very good thing because I was born here and live here. I believe, as a Cuban, I have the right to it all. It’s good. Really good,” Elizabeth Quintana, a relieved Havana resident told AP Television.

Receptionists at several hotels in Havana reported no immediate spike in reservations volume. Other tourism employees said they had not yet been officially informed of the change.

Like other guests, residents will be charged in convertible pesos worth 24 times the regular pesos earned by state employees.

Catering to tourists and foreign executives, many of Havana’s best-known hotels charge well over 100 US dollars per night.

The four-star Ambos Mundos, for example, charges 173 US dollars a night in high season, more than eight times the average monthly state salary of about 20 US dollars.

Some hotels scheduled meetings with all staff members to discuss the changes, and officials said new rules will also allow Cubans to rent cars at state-run agencies for the first time.

There was no official announcement in state-controlled media on the lifting of the ban on hotel rooms and other tourist services, and word spread slowly through the Cuban capital.

On Friday, Cuba authorised its citizens to obtain mobile phones, which only foreigners and key officials in the communist government were previously allowed to have.

A resolution from the Interior Commerce Ministry also authorised the general sale, beginning on Tuesday, of computers, microwaves and DVD players, items which had only been sold to companies and foreigners.

But much of the population has access to convertible pesos or other foreign currency, either through jobs in tourism or with foreign firms or cash sent by relatives living in the US. They will suddenly have a host of new ways to spend their money.

Tourism generates more than two (b) billion US dollars annually in the country, and official restrictions that banned all Cubans, even those who can afford it, from enjoying beach resorts and luxury hotels were an especially sore point for many on the island since the government began encouraging foreign tourism en-masse in the early 1990s.

Critics of the government have for decades branded the bans “tourism apartheid.”

You can license this story through AP Archive:

The post Cuba lifts ban that kept its citizens from staying in tourist hotels appeared first on Miami County News and Events.