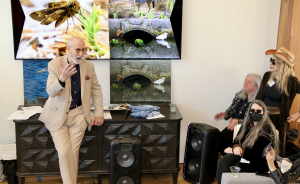 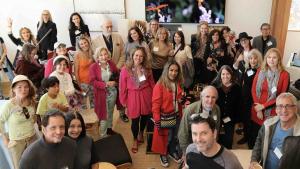 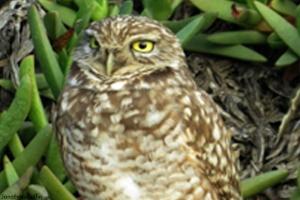 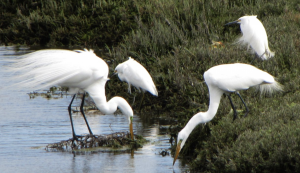 Egrets enjoying life at Ballona Wetlands, unaware there is a plan to destroy their home

“We will win,” declared Cromwell, to a roar of approval from the more than 200 Los Angeles residents who were there because they cherish wildlife.

With the lawyers who are fighting in court standing nearby, Cromwell vowed to do all he could to stop the project, declaring, “we will win,” to rousing applause from the crowd. The Defend Ballona Wetlands event raised more than $15,000 to pay for attorneys fees in the battle to protect the habitat.

Several lawsuits are in court challenging the deeply flawed plan to bulldoze the ecological reserve that is home to 1,700 species including threatened and endangered species. The Army Corp of Engineers has refused to give approval to the project, citing mistakes in the flood control figures, which critics say could result in danger to surrounding residents as sea levels rise and storms intensify.

Marcia Hanscom, of DefendBallonaWetlands.org, said, “We have a 20-point Gentle Restoration Plan, which achieves the legitimate goals of restoration, without decimating wildlife. Wholesale destruction is not restoration; we will prove that in court.”

Also stirring up the crowed was UnchainedTV founder and New York Times bestselling author Jane Velez-Mitchell who said, “I saw more than 40 pelicans playing near the mouth of the Ballona Wetlands, and I burst into tears, fearing what these bureaucrats have planned for them. I will fight to the end to save the wildlife because I don’t want to live in a dead zone, where the wild animals have been wiped out. How can we criticize Brazil for destroying its wetlands, if we bulldoze ours?”

Wendy-Sue Rosen, of Protect Ballona Wetlands, said the question remains, “Why? We are perplexed as to why the state wants this when Governor Newsom has called for nature-based solutions. Bulldozing will release stored and sequestered carbon into the atmosphere at a time of climate emergency. It makes no sense!”

Critics have denounced this plan as the ultimate greenwashing plan. “Follow the money,” said Simone Reyes, an attendee, noting the fossil fuel industry has a gas storage facility underneath the wetlands which they want to retrofit with new pipes and wells. “How are you going to get down there to work on it without those bulldozers? That’s the real objective.”