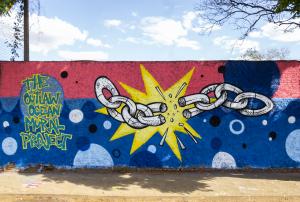 Area 35 Crew’s artwork for The Outlaw Ocean Mural Project can be found in Estiva, Brazil and is called “Ocean Freed.”

The project will broaden people’s understanding of graffiti, the lawless ocean and the panel we made.”

A global effort to disseminate investigative journalism about human exploitation and labor crimes at sea, the project brings together muralists from around the world to leverage public creativity with a cause. The art they create is based on the groundbreaking reporting produced by a small, non-profit news outlet based in Washington, D.C., The Outlaw Ocean Project. The organization exposes the urgent problems happening on the earth’s oceans including sea slavery, arms trafficking, the climate crisis and overfishing.

What makes The Outlaw Ocean Project a distinct news organization is three-fold. First, the reporting focuses on the more than 50 million people who work in a realm that covers over two thirds of the planet, but whose stories are rarely told. Second, the news-gathering is funded directly by readers and foundations so that the stories can be published for free in over a half dozen languages and more than three dozen countries, which gives it wide impact. Third, the journalism is targeted toward non-news platforms and a younger and more international audience by converting these stories into art. In turn, individuals are able to connect with the issues on a more visceral level.

The Outlaw Ocean Mural Project is part of this innovation and offers a communal display of nontraditional journalism with unmatched effectiveness.

Area 35 (A35) Crew is a collective of graffiti artists and inter-regional Hip-Hop writers from Estiva, Brazil. The group strives to boost cultural development through urban art and graffiti, focusing on public murals, workshops for the community and presentations made by local opinion makers.

By joining The Outlaw Ocean Mural Project, A35 Crew aims to draw attention to the often hidden crimes committed on the ocean including piracy, slavery and the killing of various species of marine animals.

The goal of the group is to reach a wide audience, from children to the elderly, using what crew member Jéferson Vilela (Tadeo) calls “the magic ability” of art to touch the masses.

“We have the opportunity to reach an audience that, perhaps, would not have otherwise had access to this urgent topic,” Luciano Prado said. “We see the desperate need for change and the author of The Outlaw Ocean, Urbina, shows us that change is possible.”

Area 35 Crew’s mural can be found in Estiva, Brazil and is called “Ocean Freed.”