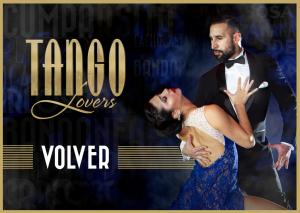 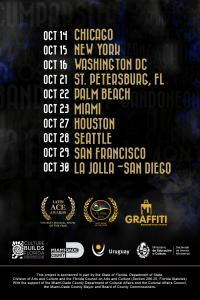 CONSIDERED ONE OF THE BEST TANGO COMPANIES, TANGO LOVERS WILL PERFORM IN TEN CITIES ACROSS THE UNITED STATES

VOLVER marks the return of TANGO LOVERS to the international stages after a couple of difficult years for art and humanity. The tour will kick off on October 14th, with performances in cities from Coast to Coast including Chicago, New York, Washington DC, Maryland, ST. Petersburg, Palm Beach, Miami, Houston, Seattle, San Francisco and La Jolla in San Diego.

Also, as a surprise for the public, on October 19 the entire company, along with special guests, will perform at the LATIN BEAT FESTIVAL at the Miami Beach Bandshell with live bands playing Argentine Rock, Salsa, Folklore and Tango, closing with a milonga for all fans who want to dance since the cast will also give an express tango dance class.

Tango Lovers with the vision of uniting generations and cultures through the Rio Platense rhythm and with the artistic and innovative excellence for which the company is characterized, has won several international awards, including, in 2015 and 2018, the ACE for “Best Show of the Year” awarded by the New York Critics of Entertainment Association and awarded again in 2017 by FOX Music USA in Miami, as “Best Artistic Show” for its production “El Centenario de la Cumparsita” which toured the USA. It also has the award for Lifetime Achievement and for the “Best International Production” by AUREA. Its Musical Director, Lautaro Greco, has three Grammy Awards and the dance team has World Tango dance Champions and Vice-Champions.

VOLVER tells the story of a group of emigrants who leave their native country and after traveling the world and learning about new cultures, they return years later. During that time, tango becomes their sign of identity which they proudly decide to show to the world. The show captures the evolution of the tango phenomenon, the influences it had and the mergers it made to become what it is today, world-renowned music, a world heritage icon.

This adventure, which goes beyond the experiences and feelings of any person who must emigrate, brings together the personal story of its director and creator, Alfredo Lérida, and the company Tango Lovers, paying homage to the different places they have traveled over the years, until becoming appointed Cultural Ambassadors by the Uruguayan government and receive the national pavilion at the 2019 Graffiti Awards.

Among other scenes, the show recounts the influence of the cultures they transited with special scenes on Chicago, their arrival to the Asian continent with the interpretation of the Watashi tango, the European passage with a novel contemporary performance of the 2 x 4, surrounded by a historical overview of tangos from all eras.