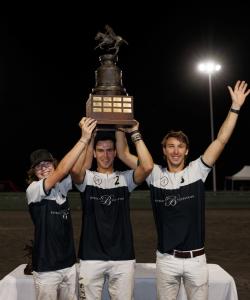 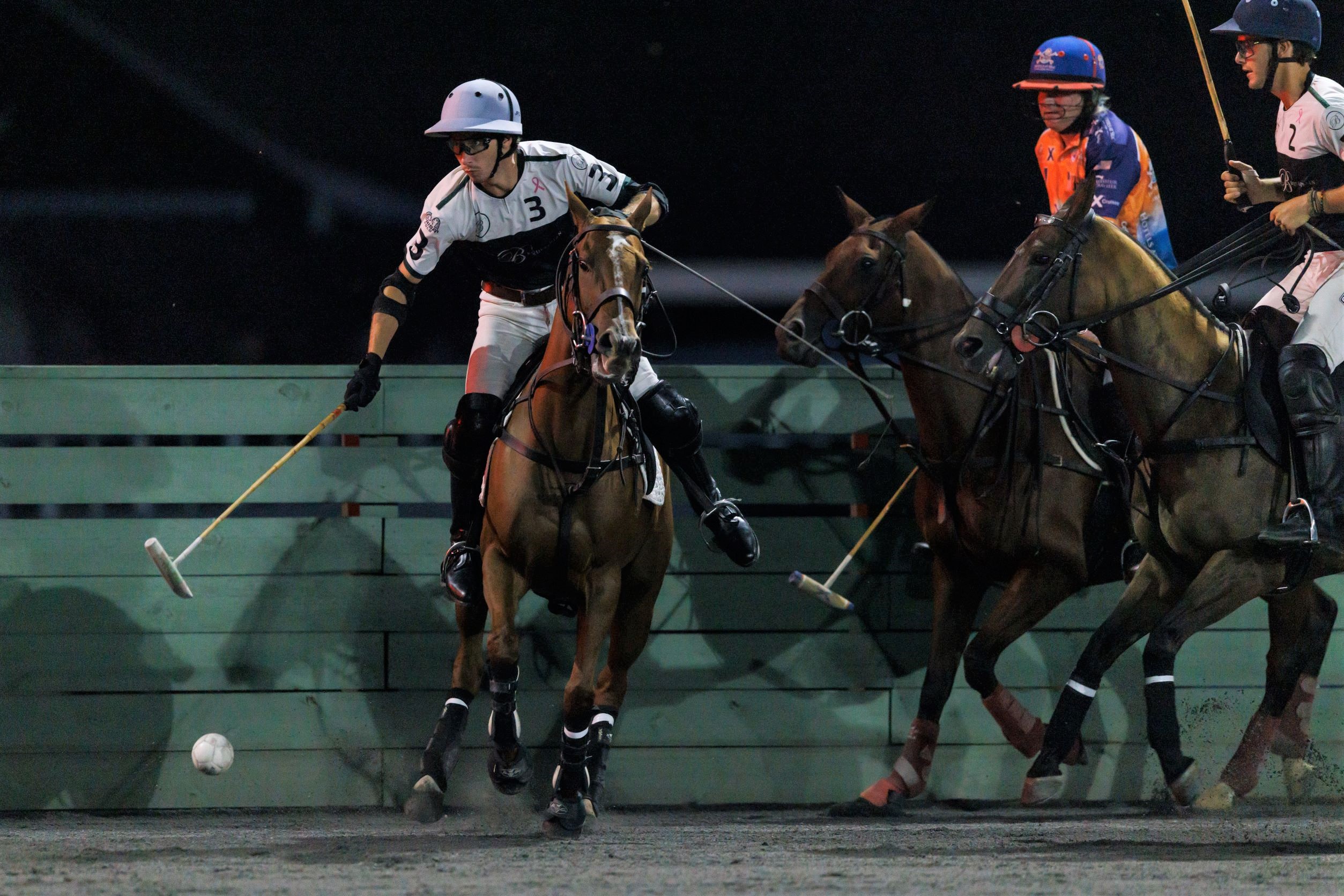 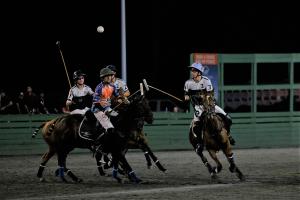 Beverly Equestrian’s Tolito Fernandez Ocampo Jr. pops the ball into the air ahead of Marcos Bignoli of Hotels At Sea. ©Tony Gibson

It’s funny, I don’t play him (Yatay Alcon) very often on the grass but in the arena, he is the best horse in the barn. He’s always on my list first and last chukker.”

Arena polo is a fast-paced sport with both human and equine teammates competing. Players use their mounts to move an opponent away from the ball and use the walls to rebound and play angles and passes to their teammates. It’s fast, it’s physical and reaction times are quick. It is often likened to “Hockey on Horseback”.

From the outset of the semifinals, Beverly Equestrian showcased a cohesive team performance that was built from preparation that began months before. “We have a great arena at Beverly [Equestrian] where we could train the last month together as a team. I think that is something that really helps and not all of the teams that play the Open had the chance to do what we did,” shared Lucio Ocampo. The chemistry was evident in their 22-13 win against Liberty Hall (Zak Coleman, Liam Lott, John Gobin) as they charged into the final against a familiar opponent for 7-goaler Tolito Ocampo. “I’m not an arena guy and this is my fourth U.S. arena tournament I have played,” Ocampo laughed. “I used to play with Hotels at Sea, but unfortunately had to play against them today.”

Wasting little time, Tolito Ocampo found the goal just 13 seconds in, setting the tone for a fast-paced opening chukker that produced twelve goals between the two teams. Brothers Lucio and Tolito Ocampo were a formidable duo in the early stages of the match, relishing the opportunity to play together in the arena. “I haven’t had the opportunity to play much with my brother, maybe last year in the 8-goal, but not much and I was looking forward to playing with this team,” mentioned Tolito Ocampo.

Winning a hard-fought semifinal battle against Core Real Estate (Andrew Baldwin, Eden Ormerod, Connor Deal) to claim their place in the final, Hotels at Sea reorganized and began the second chukker with a combined team effort that slowed the electric Beverly Equestrian attack. Bignoli began the scoring, while teammate Sivori added his second goal of the match. The momentum for Hotels at Sea was limited to the short scoring burst however, as Tolito Ocampo converted a Penalty 2, followed by brother Lucio finding the goal just before time expired in the first half for a commanding 12-5 lead.

Desperately trying to pull his team within reach in the second half, Bignoli brought the deficit back to six, but the skill of Tolito Ocampo continued to give Beverly Equestrian the edge. Working the ball down the arena on the nearside, Tolito flipped the ball through the goal, while Lucio blocked a pass from Salahi to run in another, leaving Hotels at Sea facing a significant seven-goal difference with just one chukker remaining.

Back on his mount, Yatay Alcon, in the final period, Tolito Ocampo singlehandedly brought Beverly Equestrian’s lead to 10—all but securing the victory. A long shot from Sivori that travelled the entire length of the arena found the goal for the only two-point goal of the match, but it was not enough to bring Hotels at Sea back into the game. Beverly Equestrian celebrated the 18-11 win to capture the U.S. Open Arena Polo Championship title.

A trio of players relatively unfamiliar to arena competition, Beverly Equestrian began preparation long before the start of the tournament. “We were having dinner and we brought up the idea of playing together,” shared Lucio Ocampo as they formed the plan to compete in the highest rated arena tournament in the United States. “I think us being so close together as people really helps and we practiced as much as we could in our own arena and we talked about it as much as possible,” said Ballhaus, who was also a newcomer to the arena. Any shortcomings from inexperience were boosted by Ballhaus’ familiarity with the Ocampo brothers. “I have been playing with Tolito since 2017. He’s kind of the guy that got me into polo so if it wasn’t for him, I wouldn’t be playing.”

Despite not playing too often in the arena, Tolito Ocampo is acquiring a reputation as a player to watch, collecting his fourth win to remain unbeaten in U.S. arena tournaments. “Wil went to the Polo Training Foundation clinics at the University of Virginia, and I was there and was looking at strategy and beginning to use a little more of the walls,” mentioned Ocampo. Finishing with 40 goals in their two games, Beverly Equestrian demonstrated an exceptional level of play that carried them to victory in their U.S. Open Arena Polo Championship debut.

Best Playing Pony was awarded to Yatay Alcon, a powerhouse for Tolito Ocampo that elevates his play to another level. “I owe him more than half of my handicap. Any time I go in there I can go over any horse, any player,” said Ocampo. His impact on the first and fourth chukkers were instrumental in Beverly Equestrian’s dominance to separate themselves from Hotels at Sea. “It’s funny, I don’t play him very often on the grass but in the arena, he is the best horse in the barn. He’s always on my list first and last chukker.” Coming from Nacho Figueras breeding operation, Yatay Alcon added another win to his impressive resume after capturing Best Playing Pony in the 2021 National Arena Chairman’s Cup.